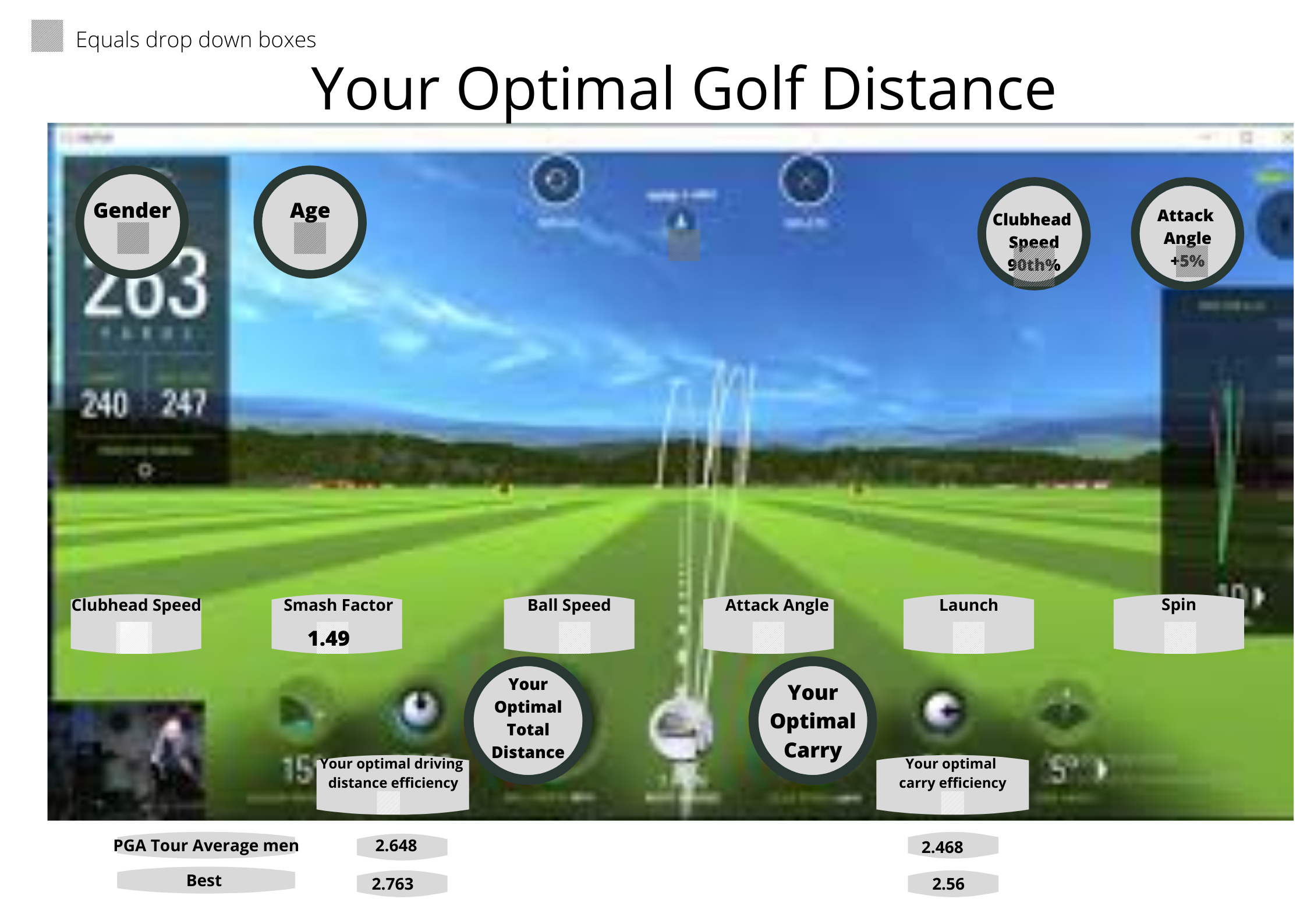 How to add 135 yards to your drives 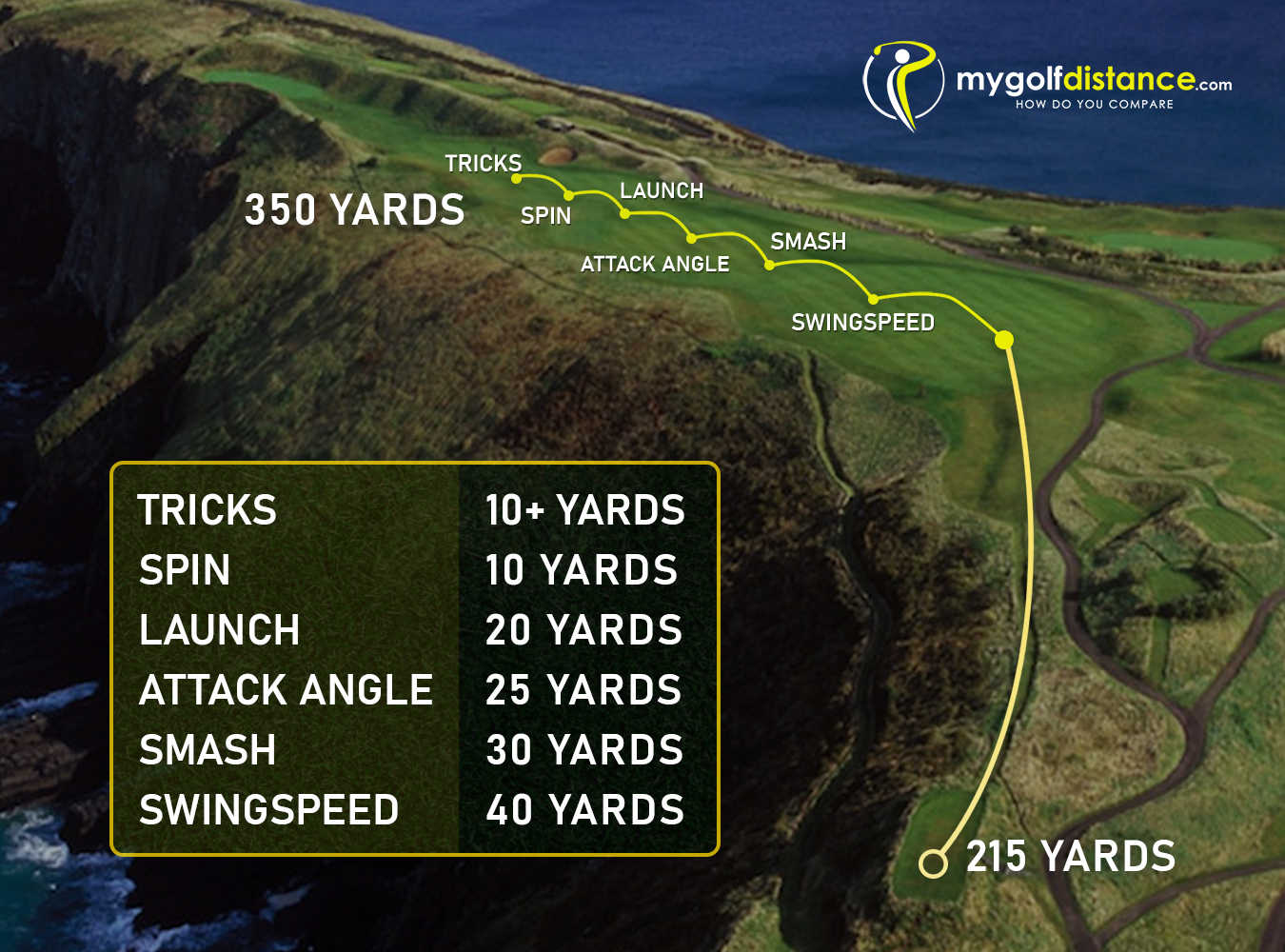 So, if you are an average male golfer, you hit your driver around 215 yards, as shown in our average golfer calculations, you might be wondering how much further you could actually hit it. The answer is surprisingly long, in fact another 135 yards, which could bring your averages all the way up the tour’s best drivers nearing 350 yards. While such distances will be beyond the reach of many golfers, knowing where the potential gains lie will still show golfers of all ages and abilities where they can improve the most. The graphic above summarises where these gains can come from as summarized below.

Yes, Clubhead speed is still the ‘King’ of distance. The faster (note-not harder) you swing the club, all other things being equal, the longer you will hit, as has become increasingly more popularized by the likes of Bryson DeChambeau or Tony Finau chasing 200mph ball speeds during the great lockdown. There are a variety of ways to increase distance covered in our Clubhead Speed section, but it is reasonable to assume the average golfer can add 15mph to their speed (which is also the average results of TopSpeedGolf’s in person 3-day distance clinics). Given an average distance efficiency (yards per mph of swing speed) of 2.6. That adds up to a massive 40 yards extra per drive.

Smash Factor defines your ability to catch the ball on the centre of the face. Ironically, this can be the opposite of clubhead speed in many golfers but hitting the ball off the centre of the clubface consistently is a big contributor to ultimate distance, never mind accuracy. Normally a centre hit driver will result in a smash factor of 1.5 times, meaning ball speed will be 1.5 times clubhead speed. A poorly hit shot, less than an inch off centre, will result in a smash factor of 1.35 times (the average amateur achieves 1.44 according to trackman). This results in someone with a 100mph swing speed (about mid-range for keen male golfers), losing almost 30 yards in total distance, using an efficiency factor of yards to ball speed of 1.85, a reasonable target per our optimization tables.

With the advent of increased study and trackman type sessions, we now know that increasing attack angle (AoA) is a major source of distance, especially when combined with higher launch and spin. Long drive competitors will hit up on the ball up to 10% (i.e. a positive AoA of +10 degrees) compared to PGA Tour pros who hit down by 1 degree and average male golfers who hit down 2 degrees. While it is somewhat difficult to separate out the benefits of attack angle from launch and spin, we know from our optimisation tables that a 150mph ball speed hit with an AoA of +6 degrees will travel 18 yards longer than one hit down 4 degrees. As Adam Young regularly pointed out in a recent blog, increasing his AoA increased his drives by over 55 yards, and in our analysis suggests just under half of this comes from AoA of around 25 yards, independent of solely launch and spin.  Our chart which summarises the optimal distance data available on our website also emphasises the positive impact of attack angle on ultimate distance, you can see the chart here

Pros have known over the last decade that high launch and low spin are the magic ingredients for them to get greater distance. Phil Mickelson is a perfect example on the PGA tour. The graph below shows his launch angle over the last 15 years which has increased from 8 degrees to 13.3 degrees, helping Phil actually gain yardage despite declining age-he averaged 300-yard drives in 2021. Launch monitors show that at Phil’s 175mph ball speed an increase in launch angle from 8 to 14 degrees will increase carry distance by 16 yards and 9 yards total distance on medium ground. For amateur golfers with slower swing speeds, launch angle is even more important and studies have shown that most amateur golfers should be launching the ball higher, especially with the driver. 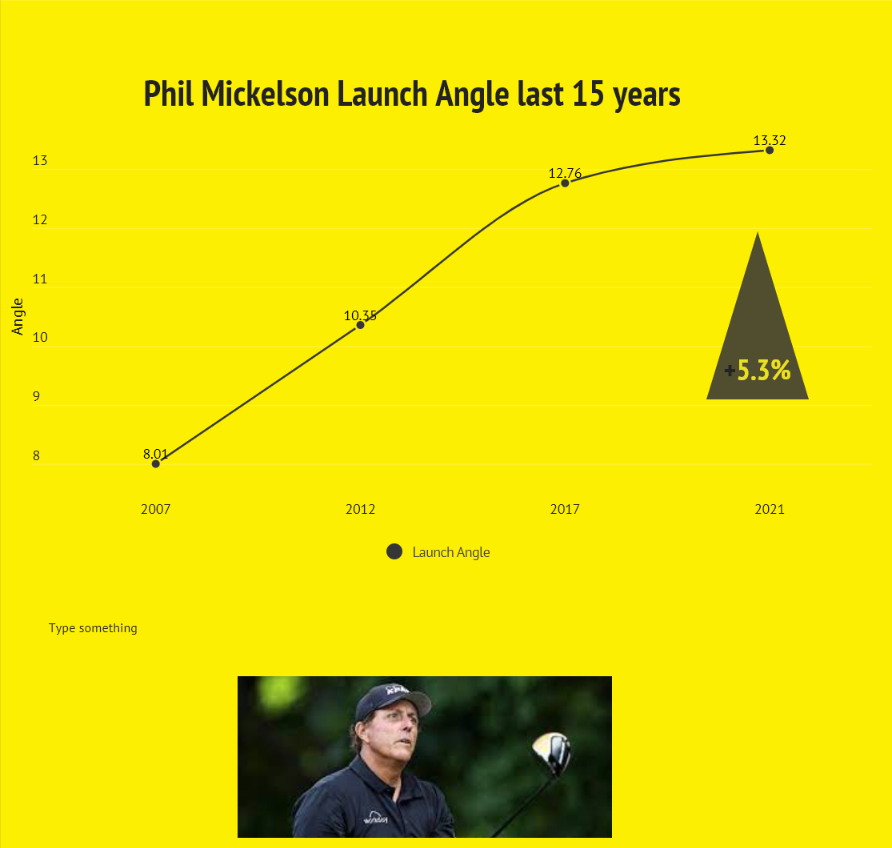 As stated above lower spin is also part of the equation to longer distance, especially at higher ball speeds. If we again use Phil Mickelson as an example, from 2007 to 2021 he reduced his average PGA Tour driver spin from 3274 to 2560 which on launch monitors at his ball speed increases total distance by 10 yards (288 to 298 yards). In fact, Phil could add almost another 10 yards if he reduced his spin down to closer to 2000.

We all like to find ways to add ‘easy’ yardage and our section on this discusses a few known ideas ranging from the golf ball you use to hitting the ball slightly above and toe side of the marked sweet spot on your driver.

Try our simulator to find out your optimal distance